As a lot of you already know, we relocated from Newham in Truro to the Mill Building near Bissoe, Truro.

Here's some historical pictures and information about our premises.

The Mill is the large open building – see attached photo from John Hurr (was the mines chief electrician) from around 1976, where you can see the three ball mills (like giant washing machines) which crushed and “milled” the ore. As a matter of interest (or not, unless you are nerdy!) you can see these three same ball mills sitting outside South Croft if you drive past today.

The other photo attached is the Concentrator building (BWF) under construction in around 1974. The “milled” ore left Metal Surgery’s building, had sulphuric acid added, and then it was pumped to the very top of our building where it was processed (hence it was sometimes called the Processor building) until all that was left was a relatively small quantity of tin and copper, plus other elements including silver and gold (tiny amounts, sadly) – hence the original ore was “concentrated”, which is why it is called the Concentrator building.

The final photo, which shows upstairs in (BWF) Concentrator building – and you can see the machinery, much of which is still in place after 40 years… 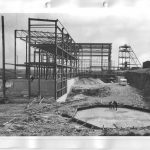 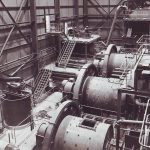 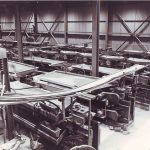